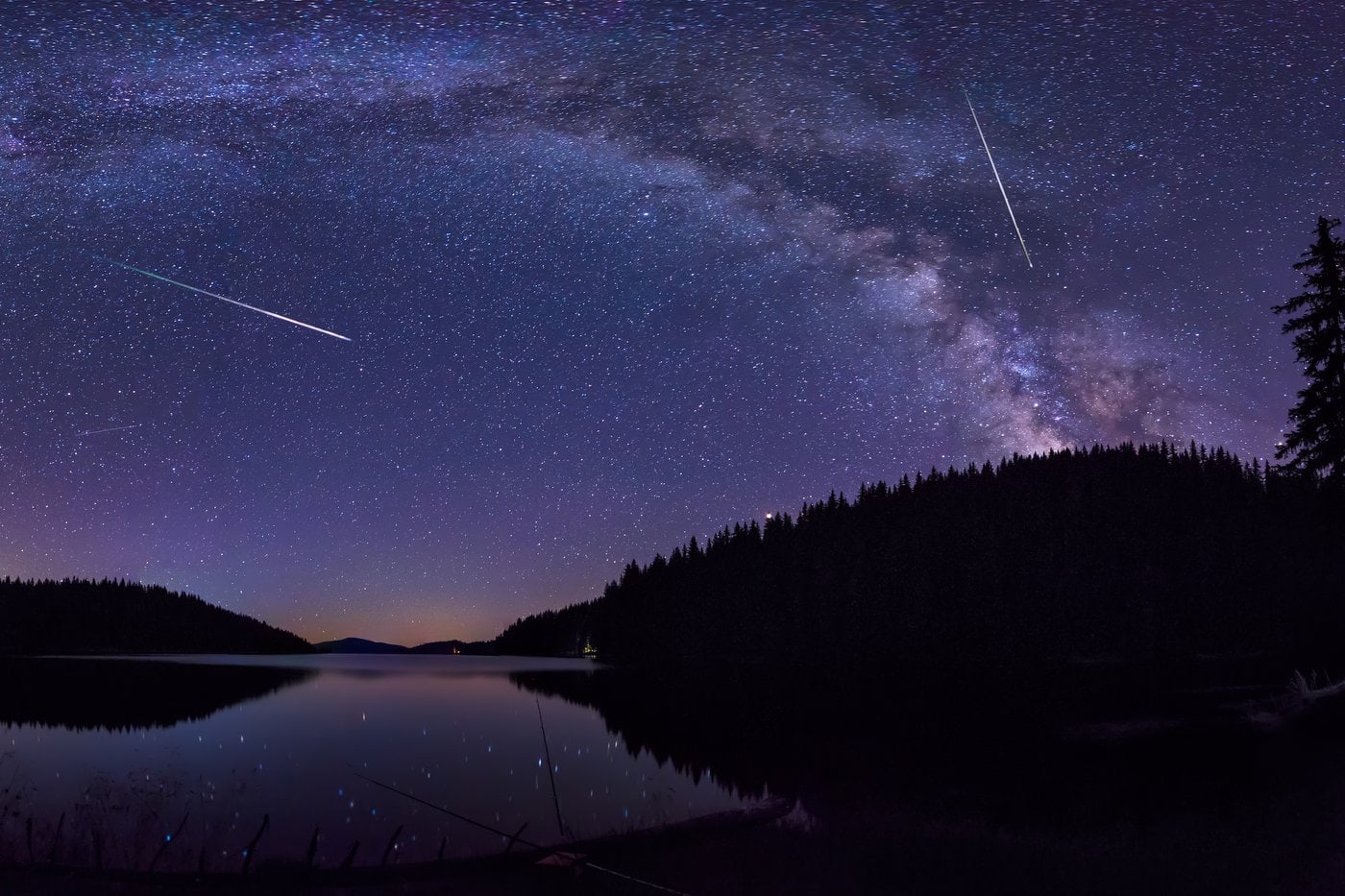 The magic of meteor showers

When our planet passes through a trail of debris — pieces of rock and ice ejected from comets or asteroids while orbiting the sun — we get a meteor shower here on earth.

Most meteors are no bigger than a pea, and vaporize as they enter the earth’s atmosphere, creating bright streaks across the sky. The meteors can appear anywhere, heading in any direction. A meteor that reaches the ground it is called a meteorite.

There are two well-known meteor showers each year (NASA calls them “showy”) each year: the Perseids in August, and the Geminids shower in December. They both typically have enough activity — often around 100 meteors per hour — to keep even the most blase kid interested.

To make things even more interesting, some meteors have a little bit of color. NASA explains that this is caused by light emitted from metal atoms from the meteoroid (blue, green, and yellow) and light emitted by atoms and molecules of the air (red). The meteor color depends on how the forces combine, and you can find out more about this here.

The only showers you need a calendar for (hopefully)

If you’re curious when you should be looking skyward for that next downpour of space rocks, take a look at StarDate.org’s meteor shower calendar. Complete with dates, peak dates, and moon phases (the less light there is in the sky, the more meteors you’ll see), along with lots of general astronomy and stargazing info.

The American Meteor Society site also offers a wealth of information, including dates and times, photography tips, viewing details and more for both pros and hobbyists.

Another good reference for showers and other celestial events — such as eclipses, comets, and planetary happenings — is SeaSky.org’s Astronomy Calendar, which is chock-a-block with all sorts of fascinating star and sky-gazing occurrences.

From NASA comes this little calendar of annual meteor showers:

January: Quadrantids
The Quadrantids, which peak during early-January each year, are considered to be one of the best annual meteor showers.

April: Lyrids
The Lyrids, which peak during late April, are one of the oldest known meteor showers: Lyrids have been observed for 2,700 years.

July: Delta Aquariids
The Delta Aquariids are active beginning in mid-July and are visible until late-August. These faint meteors are difficult to spot, and if there is a moon you will not be able to view them.

August: Perseids
The Perseids, which peak during mid-August, are considered the best meteor shower of the year.

October: Orionids
The Orionids, which peak during mid-October each year, are considered to be one of the most beautiful showers of the year.

November: Leonids
The Leonids, which peak during mid-November each year, are considered to be a major shower though meteor rates are often as low as about 15 meteors per hour.

December: Geminids
The Geminids, which peak during mid-December each year, are considered to be one of the best and most reliable annual meteor showers.

Ready to go? Get some tips

If you live near anything remotely resembling a major metropolitan area, you’ll probably need to get at least a little bit outside of town to see anything but the brightest ones. Light pollution covers up the rest. If you can, block the moon with a building, tree or mountain so the sky is as dark as possible. Visit DarkSky.org for more tips.

Time it right. The best views are under clear skies, after the moon sets. Especially if you’re taking kids along, don’t wake them up long before the show starts, because they probably will be tired and bored.

Dress for the weather. You’re going to be out in the dark, usually predawn hours. Bring some bug spray if it’s summer. Bundle up and bring a thermos of something hot in the winter. Got some folding camp chairs? Bring ’em. Leave the binoculars at home, however, because you won’t need them.

A flashlight with a red filter over it is handy to read star charts or maps in the dark without killing your night vision — making it hard to see the sky again for at least a few minutes — and is also nice for not stumbling over everything in the darkness on your way back to the car.